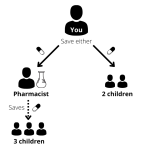 Over at utilitarianism.net, we’ve just published two new objections pages, addressing: (1) the mere means objection, and (2) the separateness of persons objection. What follows are some highlights from the two pages.

It’s often claimed that, in permitting one person to be killed to save five, utilitarianism treats the one “merely as a means” (rather than as an end in themselves). But this is mistaken, as we explain:

Utilitarianism counts the well-being of everyone fully and equally, neglecting none. So, while it (like other theories) permits some forms of using as a means, it never loses sight of the fact that all individuals have intrinsic value. That is precisely why the theory directs us to do whatever will best help all those individuals. This may lead to outcomes where some particular individuals are disadvantaged, but it is important not to conflate ending up worse-off with counting for less in the process of determining what would be best overall (counting everyone’s interests equally).

We go on to rebut Kamm’s claim that utilitarianism “does not give people equal status as ‘ends in themselves’” when it prioritizes saving those who have more instrumental value (say, for saving additional lives).

Finally, we emphasize that, while it’s true that utilitarians violate Kantian standards for how to respond to the intrinsic value of persons, it’s equally true that Kantians violate utilitarian standards for how to respond to this value. Everyone agrees that people are ends in themselves; the disagreement is just about what follows from that morally. It’s obscenely uncharitable to accuse the opposing theory of not valuing people as ends at all, just because you disagree about how one should respond to intrinsic value. So I would kindly ask other theorists to please stop doing this.

The Separateness of Persons objection

This article is a big one! We address three possible interpretations of this nebulous objection:

(1) Compensation. Some object that (in contrast to intra-personal tradeoffs) inter-personal tradeoffs involve benefiting others, while the harmed individual is in no way compensated by this. But so what? If we’re not egoists, we shouldn’t expect that we need to personally benefit before taking others’ interests to sometimes outweigh our own.

(2) Fungibility. This is my favourite version of the objection, and we draw upon my published work in response to it:

There is not just one thing, the global happiness, that is good. Instead, there is my happiness, your happiness, Bob’s, and Sally’s, which are all equally weighty but nonetheless distinct intrinsic goods. What this means is that the morally fitting agent should have a corresponding plurality of non-instrumental desires: for my welfare, yours, Bob’s, and Sally’s. Tradeoffs between us may be made, but they are acknowledged as genuine tradeoffs: though a benefit to one may outweigh a smaller harm to another, this does not cancel it. The harm remains regrettable, for that person’s sake, even if we ultimately have most reason to accept it for the sake of more greatly benefiting another.

(3) Anti-aggregative intuitions. Some simply find the verdicts of aggregative views to be counterintuitive, e.g. in Scanlon’s famous Transmitter Room case:

Jones has suffered an accident in the transmitter room of a television station. To save Jones from an hour of severe pain, we would have to cancel part of the broadcast of a football game, which is giving pleasure to very many people.

We offer a broadly Parfitian response, showing, first, that our initial anti-aggregative intuitions may be explained away. And second, that anti-aggregative principles would have implications that are arguably even more objectionable.

Next time you hear someone raising one of these confused objections against utilitarianism, feel free to direct them to these pages!

(Coming soon: responses to the Alienation and Special Obligations objections…)