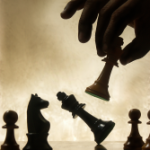 Isn’t Logic Great?
Rick Pimentel considers the practical aspect of logic and the dangers of reasoning fallaciously. We tend think philosophy is abstract and doesn't apply to real life. Rick argues that this isn't always the case.

Of all the fascinating aspects of philosophy, the practicality of logic is one of the most important. Observing the tenets of logic in action can be quite eye-opening. Here&rsquo;s an example from popular media. During episodes of Law and Order, the characters use inductive reasoning to solve cases. Detectives arrive on the scene and see a dead body. Subsequently, they gather evidence from the body and the surrounding crime scene in hopes of garnering enough information to determine the culprit or culprits. The reasoning utilized by the detectives contains premises: statements about fingerprints, autopsies, interrogations, and weapons that lead to a probable conclusion: one shooter intentionally targeted and shot the victim. The popularity of criminal investigation shows like Law and Order has provided plenty of opportunities for viewers to familiarize themselves with inductive reasoning. However, there is another aspect of logic that is highly noticeable in our lives &ndash; the fallacy.

At first sight, there seems nothing wrong with this argument. However, if you substitute A (the antecedent) and B (the consequent) with specific premises, it is easy to see why the form is fallacious:

1) If I am in Boston then I am in Massachusetts.

2) I am in Massachusetts.

What is the problem here? The premises are true but the conclusion could be false. Simply because I am in Massachusetts does not mean that I am in Boston. I could be in Springfield; I could be in Cape Cod. The form of the argument is erroneous and thus commits the formal fallacy of &ldquo;affirming the consequent.&rdquo; Knowing formal fallacies is useful because any argument in a fallacious form is a bad argument. I could have changed the premises in the above argument to any other set of statements and it still would be fallacious.

Formal fallacies can be hard to spot but once you learn the correct forms, picking them out becomes second nature. Informal fallacies, on the other hand, are more obvious&mdash;once you know what to look for. Informal fallacies are errors with the content of the argument, specifically with the premises. Informal fallacies can be easier to spot because the content of an argument is &ldquo;out in the open&rdquo; whereas the form can sometimes be hidden. There are numerous informal fallacies such as &ldquo;appeal to authority,&rdquo; &ldquo;ad hominem,&rdquo; &ldquo;equivocation,&rdquo; &ldquo;straw man argument,&rdquo; &ldquo;begging the question,&rdquo; and &ldquo;non sequitur.&rdquo; For example, a straw man argument occurs when someone distorts their opponent&rsquo;s argument in order to make it weaker than it actually is and claims that the opponent&rsquo;s position has been refuted. Let&rsquo;s suppose that David and John are engaged in a debate about the invasion of Iraq. David is in favor of the invasion and John is against it. David presents his reason for supporting the invasion and John responds by arguing that David and supporters of the invasion condone violence and as such are warmongers. John makes this new claim but acts as if he&rsquo;s responding to David&rsquo;s original argument and in so doing refutes it. John is guilty of advancing a straw man argument. John never offered a rational rebuttal but misrepresented David&rsquo;s argument by introducing a new claim and attacking that.

&ldquo;Shotgun argumentation&rdquo; is an informal fallacy that may not as familiar. This fallacy pertains to a flawed method of argumentation due to the sheer amount of purported evidence being presented. Short, quick-fire arguments are directed at a person&rsquo;s interlocutor with the intention of overwhelming him or her (Eugenie Scott dubbed this technique the &ldquo;Gish Gallop&rdquo; after creationist activist Duane Gish). The more small, usually fallacious, arguments presented by the arguer in favor of some claim, the higher the probability that someone will believe the arguer regardless of the absurdity of the arguments. This fallacy can be effective because the recipient of the arguments finds no time to properly refute the arguments.

Recently, I observed this in action. While watching a soccer game from Portugal with my father and a friend recently at a local restaurant, an unusual event occurred on three separate occasions during the game. This was an important game between two top teams in Portugal and we all favored the visiting team (as did most of the people at the restaurant we were visiting). The score was 0-0 midway through the first half when half of the stadium lights went out thus forcing the referee to pause the game. The lights came back on after a few minutes and the game resumed. Minutes later, the same stadium lights went out again.

Two of the fans next to me claimed that the home team had the lights shut off intentionally to disrupt the game. From there, a slew of short, quick fire arguments initiated with the intention of providing evidence for an alleged conspiracy led by the front office of the home team. Just like a &ldquo;shotgun&rdquo; fires many bullets with the hope that one will hit its target, the fans presented a series of claims about these supposed actions with the hope that one of these arguments will support their conclusion. However, no solid evidence was presented to support the conclusion. The fans overwhelmed any would be rationalist with a bunch of alleged evidence that is never given a chance to be scrutinized. The fans presented no solid reason for why the home team might benefit from intentionally shutting the lights but, from their perspective, they had irrefutable evidence of a conspiracy.

We all, myself included, have been guilty of committing this fallacy. But when we learn to recognize it, we can more easily pick out errors in reasoning. There is a catalogue of informal fallacies that are important to know and understand for our sake and for the sake of others. This is part of the significance of philosophy. To be able to observe logic in action, recognize its practical implications, and apply its principles to our lives is not only reasonable, it&rsquo;s necessary to live a better life.

by Massimo Pigliucci What do you know? Not much, and you? That was the tagline of a Public Radio International comedy...

Our default intuition when it comes to consciousness is that humans and some other animals have it, whereas plants and...

Jennifer Morton, associate professor of philosophy at the University of Pennsylvania, has been selected as the winner of the 2022...

Apropos last week’s “We’re Not Ready for the AI on the Horizon, But People Are Trying,” here is economist and...

December 8, 2022
We use cookies on our website to give you the most relevant experience by remembering your preferences and repeat visits. By clicking “Accept”, you consent to the use of ALL the cookies.
Do not sell my personal information.
Cookie SettingsAccept
Manage consent