The Table Talk series focuses on everyday issues that we discuss with one another and have philosophical significance. The previous Table Talk articles dealt with common sense and minding our own business. Statements such as “that’s common sense” and “it’s none of my business” are frequently used but not always evaluated. Certainly, there are other statements that fall into this category such as, “There is one thing that I never argue about: religion”? (there exists another version of this statement that includes religion and politics). Normally this statement is made with strong conviction as if it is not to be compromised but it always puzzles me when someone says this. Despite the fact that it is well within the right of the speaker to adhere to this idea, it still brings up two important questions: Why is this statement made? Is the topic of religion worthy of discussion?

There are several reasons why may say, and genuinely accept, this. One is indifference and this indifference can be expressed in two ways. Some are indifferent because they argue that religious issues are hotly disputed and diverse and conclude that there is no hope in finding any truth in the middle of all these differences and disagreements. The attempt is futile. Some are indifferent because they simply do not care about religion and argue that we should be more concerned with practical matters, while still others are simply impatient with theological and philosophical issues. “The attempt to discuss these matters is preposterous.”, they might claim. Moreover, others do not discuss religion because they find the idea so overwhelming. Here we are attempting to just get by each day and trying to understand the mysteries of religion is quite a daunting task. Lastly, this statement is made because of fear and disillusionment with religion. Some fear the discussion of religious and philosophical matters because they simply do not know how they feel about these topics. They have never really examined it. Or they think that they have examined it and are afraid to find out that they may be wrong. Some are simply disillusioned by religion because of violence committed in its name. They think of conflicts and offenses that have occurred because of religious issues and feel that the teachings of religion have lost their credibility. These reactions to the thought of discussing religion raise another issue which is philosophically significant.

Defining religion is an task unto itself. The meaning of the term ‘religion’ has been hotly debated for centuries by theologians, philosophers, politicians, and even scientists. Because religion is so multifaceted it os difficult to come up with a definition that covers the nature of all religions. Nevertheless, I’m going to make an attempt. According to Wikipedia (believe it or not, it’s probably one of the more concise definitions in cyberspace), religion is “the belief in and worship of a god or gods, or more in general a set of beliefs explaining the existence of and giving meaning to the universe, usually involving devotional and ritual observances, and often containing a moral code governing the conduct of human affairs.” This definition is adequate particularly in how it treats the idea of the divine. Not all religions—notably Buddhism—require a belief in a divine being. The definition contains concepts such as god or gods, existence, meaning, moral code, and human affairs. It is not a stretch to claim that religion is important to our lives, regardless of whether one admires or despises religion.

Religion’s importance lies in the fact that it deals with ultimate issues; matters that are fundamental to human life such as the existence of God, death, morality, meaning of life and human behavior. These issues are a fundamental concern and understanding them appear to be necessary for flourishing in this life. Dr. Thomas Morris explains in his book, Making Sense of It All: Pascal and the Meaning of Life, that disputed questions can be divided into two categories: existentially peripheral disputed questions and existentially central disputed questions. According to Dr. Morris, the former are questions that “may be widely or hotly disputed but whose proper resolution is not really crucial for my understanding of my life or for my living of a good life.” Whereas the latter category are questions that are “widely or hotly disputed among human beings and that matter a great deal to how we understand ourselves and our lives.” For instance, some dispute which operating system is better: Windows or Mac OS X. This debate is worthy of consideration and important for computer usage but the resolution to this question will not affect the ultimate issues of life. However, the existence of God is existentially central because it greatly affects our lives and can lead to important insights into personal meaning, immortality, and ethics.

Religion can be hotly disputed and sometimes this can be discouraging or even repulsive to some but the fact that it is hotly disputed should not excuse us from pursuing an understanding of religion and how it fundamentally affects our lives. There are numerous existentially peripheral questions that are hotly disputed but how many times do you hear those issues being mentioned in the following statement: “There is one thing that I never argue about: (fill in the blank).” This is probably not a common statement. It is also important to note that the word “argue” can be misunderstood. Many times, “argue” is used to mean participation in a heated exchange. In this sense, responsible and rational people would not condone “arguing” about religion. However, the classical meaning of “argue” is to offer reasons for your conclusions. This philosophical sense of the word should be encouraged when it comes to the topic of religion. Offering reasons for our conclusions when it comes to such an important matter as religion is vital to our lives and maybe those who have uttered the statement in question will realize what they are missing.

Richard Taruskin, an influential, provocative, and prolific classical music scholar, has died. He was 77  Originally appeared on Arts &... 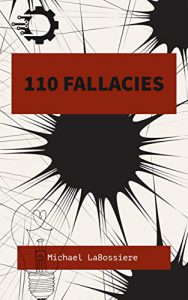 110 Fallacies – Kindle edition by LaBossiere, Michael For philosophers, a fallacy is an error in reasoning: a piece...