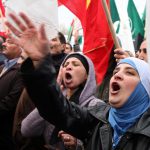 The Arab Spring: For Locke’s Eyes Only
The Arab Spring raises numerous issues in political philosophy such as the justification of the state, the nature of the state, and the role of the state, liberty, and property. All of these concepts are evident in these monumental series of events. Plato, Aristotle, Thomas Hobbes, John Locke, and Jean Jacques-Rousseau are believed to be the foremost political philosophers of Western Civilization. However, the 17th century British philosopher, John Locke, holds a special place in American political thought.

The end of each year brings the customary “best”, “worst”, and “newsworthy” lists for various subjects such as sports, political events, and movies. Any list describing the most significant political events of 2011 will undoubtedly include the Arab Spring–;a series of events kick-started on December 2010 by a fruit vendor, named Mohammed Boauzizi, in the town of Sidi Bouzid, Tunisia. Mohammed’s self-immolation began the Tunisian Revolution which resulted in the resignation of their 23 year president Zine El Abidine Ben Ali. These events provoked a series of revolutions and demonstrations throughout the Arab World. It led to the overthrow of Hosni Mubarak in Egypt, the death of Muammar Gaddafi in Libya, and the resignation of Abdullah Saleh in Yemen.

In addition, there have been major protests in Syria, Bahrain, and other Arab nations. There have been many causes for the Arab Spring such as high unemployment, inequitable distribution of income, the disenfranchisement of voters, high food prices, government corruption, nepotism, and the suppression of basic freedoms. The call for greater accountability in government officials had been evident in the protests and uprisings as the citizens of the Arab world became tired of the substandard treatment handed out by their governing officials along with the lack of transparency in the governing process. This has not been exclusive to the Arab world as the same concerns have arisen in Russia with numerous protesters against election fraud in Russia’s latest elections.

The Arab Spring raises numerous issues in political philosophy such as the justification of the state, the nature of the state, and the role of the state, liberty, and property. All of these concepts are evident in these monumental series of events. Plato, Aristotle, Thomas Hobbes, John Locke, and Jean Jacques-Rousseau are believed to be the foremost political philosophers of Western Civilization. However, the 17th century British philosopher, John Locke, holds a special place in American political thought. His views had a great impact upon the Founding Fathers of our country, particularly James Madison and Thomas Jefferson and served as the philosophical foundation for the Declaration of Independence and the Constitution.

Like Hobbes and Rousseau, Locke believed in the social contract theory. This theory states that there exists an arrangement among the governed to submit to a common authority. As a result, the governed surrender themselves to a sovereign authority. This theory is an attempt to answer the question, “What justifies the existence of the state?” Hobbes, Rousseau, and Locke were avid proponents of the social contract because they felt that the existence of the state was necessary for the flourishing of mankind. Locke is famously known for his emphasis on individual liberty and personal autonomy. This emphasis served as the principal philosophical catalyst for the independence of our country.

Locke believed that human beings are naturally free and equal. They are not naturally under the authority of another person or persons. Unlike Hobbes who argued for absolute power to the sovereign authority and argued against resistance against the sovereign, Locke argued that the governed do not surrender all their rights simply because they participate in the social contract. The governed retain their basic freedoms and these freedoms place limitations on the power of the governing authority.

How might Locke perceive the Arab Spring? This is best answered through Locke’s idea of the social contract and the consent of the governed. For Locke, someone is obligated to obey political authorities if they give their voluntary consent. However, Locke believed in two types of consent: express and tacit. Locke discusses these types in Two Treatises of Government. Express consent is straightforward. Locke defined it as a “declaration of a man’s consent to make [himself] subject to the laws of any government.” This consent was written or spoken. Tacit consent is not that straightforward. Locke defined tacit consent as such:

“Every man that hath any possession or enjoyment of any part of the dominions of any government doth thereby give his tacit consent, and as far forth obliged to obedience to the laws of that government during such enjoyment as anyone under it; whether this his possession be of land to him and his heirs forever, or a lodging only for a week; or whether it be barely travelling freely on the highway.”

Locke did not believe that express or tacit consent permitted a government from ruling with no restrictions whatsoever. Locke was clear, for example, that a government that devolved into tyranny was no longer the legitimate ruler of the governed and the governed were justified in resisting the authority of the government. Locke appealed to the Founding Fathers because of the relationship he advocated between a legitimate, consented government authority and the basic freedoms that the governed deserve.

As I mentioned previously, high unemployment, disenfranchisement of voters, government corruption, high food prices, and suppression of basic freedoms coupled with preexisting rifts such as tribal and religious divisions (e.g. tribalism in Libya, Sunni-Shia division in Yemen) explain the Arab Spring. These causes show that the governed in the affected countries were justified in resisting their authorities. The governments of these countries strongly restricted the rights of the governed. Journalists were not free to report the news; the government censored the Internet and imposed penalties on citizens who chose a different religion other than Islam; it prohibited the governed from freely assembling and expressing their views and interfered with property rights; the government also refused to hold fair and democratic elections.

“The body is our general medium for having a world.” – Maurice Merleau-Ponty, Phenomenology of Perception Originally appeared on Philosophy...

“No artist should be the only, the sole artist among artists, the central one, the director of all the others;...

In 1956, the American geologist Marion King Hubbert predicted that the US oil production would follow a “bell-shaped” curve,...

The 2023 annual colloquium of the Henry Sweet Society for the History of Linguistic Ideas will be held from Monday...

November 27, 2022
We use cookies on our website to give you the most relevant experience by remembering your preferences and repeat visits. By clicking “Accept”, you consent to the use of ALL the cookies.
Do not sell my personal information.
Cookie SettingsAccept
Manage consent